This is an update of sorts from the workspace situation back in August when I was exiled from the dining room then. While some of my stuff is still there, the bulk of it is now back in the basement since the smell isn’t as bad any more.

I still do most of the “clean” crafting in my office (the door to the left in the picture) while the “dirty” crafting (like sanding, painting, etc) happens right outside it in the area below: 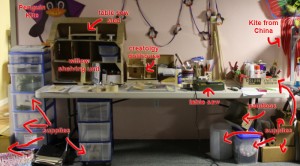 You might recognize some of the stuff in the pictures… especially the Willow. Since I told the family that the Coventry Cottage is going to be sold (hopefully) this winter, I felt that it was safe to take the Willow out of hiding (so they don’t get so used to the extra space *ehem*). But unfortunately, the Willow is now acting as a shelving/storage unit while I’m in my furniture building phase.

What the picture doesn’t include are the power tools that are hanging out in the garage. I’m limiting my time spent out there nowadays since I live in the Northeast and its freezing in the uninsulated garage. I’ll probably take a picture of that area eventually (though you can sort of get an idea of what it looks like in this picture).