I’ve been intrigued by ball jointed dolls (BJD) ever since spotting Donn Kinney‘s work on DeviantArt a few years back. These dolls, also known as “modern dolls” or “Asian Ball Jointed Dolls” are very realistic, very pose-able, and are for the collector who is primarily focused on fashion and cosplay.

I’ve never cared all that much for fashion, so I’ve never had a real interest in getting a BJD… until I started collecting miniatures and saw the pictures from Shershe’s Flickr Set.

They’re ball jointed dolls in the RGT Contemporary Ranch!… and I desperately wants it!

The dolls are called PukiPuki made by a Fairyland, a Korean company. I know, they are not perfectly 1″ scale, but it’s the closest I’ve seen in any BJDs. They are about 4.5 inches tall… so I can pretend they are big headed children of some NBA player!

Unfortunately, BJDs in general are pretty dang expensive and the PukiPuki are no different. The bare minimum model without any hair, facepaint, or clothing costs $138 (not including shipping)!

I’m not the girly type, but, but, but… they are so CUTE. They bring the pink and frilly SQUEALS out of me. I am so tempted to buy one… maybe as a Christmas present to myself?…

But I’m so broke… I must resist… somehow…

So yeah, I ended up buying the PukiPuki PongPong about 3 weeks ago (pretty much right after this post went live). I’ve not decided if PongPong is a boy or girl yet, as I am still waiting for him/her. 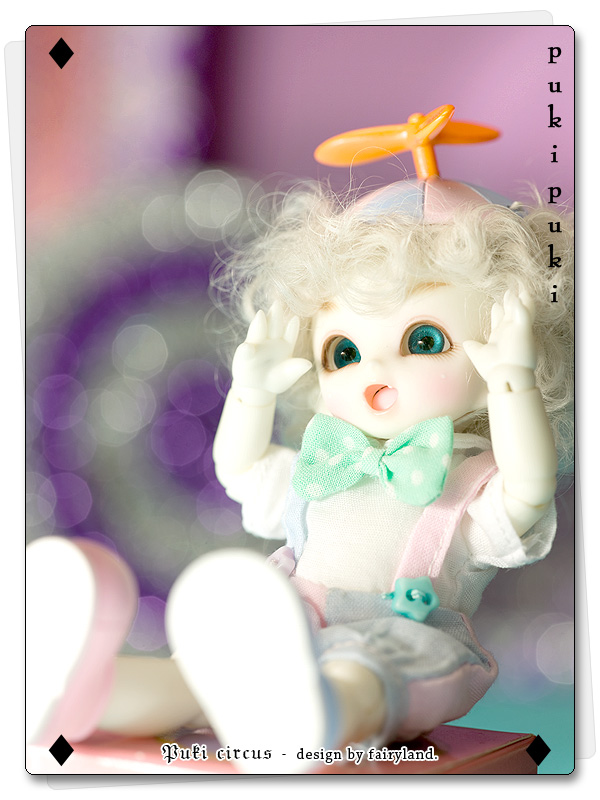 I ordered through the Denver Doll Emporium, the official US retailer for Fairyland Dolls. The best part is that they have a layaway plan where you can pay in installments so it’s much more affordable than sending off one big payment. I chose the 20% now and the rest later, because I want it ASAP. >_<

Even then, it does take about 6-8 weeks or longer, since they make it to order… *grumbles* But then again, I do want a quality product (especially for the money I paid for it), so I am willing to wait for one. I am really hoping PongPong arrives by my birthday (Jan 30th), so it would be like a wonderful birthday present to myself! 😀

After ordering PongPong, I found a company called LatiDoll that makes approximately 4″ dolls (9.8cm to be exact), that would fit in 1:12 scale even better, versus the 4.4″ PukiPukis (11.2cm).

On the plus side (at least to me), they look like freaking ADORABLE babies! 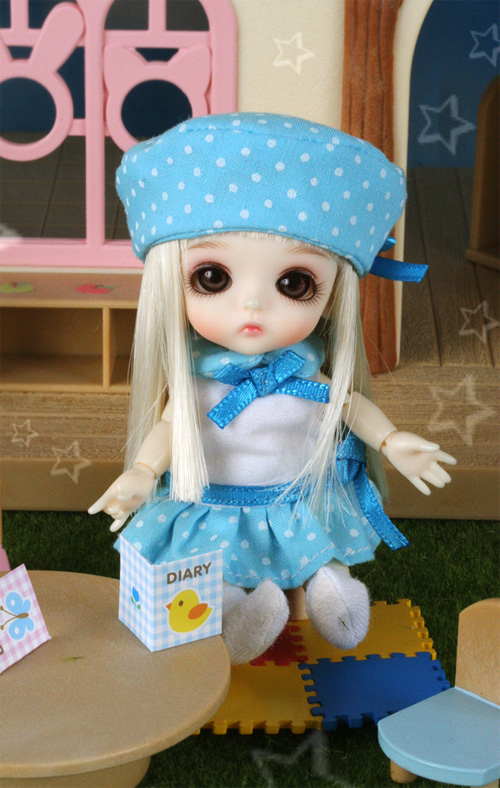 I really could not resist. I tried. Really, I did! But after checking out owner’s pictures on flickr, I ordered a Lati White Belle the first chance I got. Unfortunately, the only way to purchase the LatiDolls is through their website, so the shipping costs are rough ($40!) and they have an unusual ordering system. LatiDoll has ordering periods where you will be able to order through their site normally. Once they fill enough orders, they will close all orders to make the BJDs and ship it out. Only then will they open up another ordering period, and the cycle continues.

An ordering period opened up just recently (about a week ago) and I jumped on it in a flash!

The big sucky problem is that they make the products to order (like Fairyland), so it takes time for them to create, paint, package, and ship to my door. I’ve read that it can take from 1 month to 3+ months!

I’m super excited to get the LatiDoll (even more so than the Fairyland Doll!) and I’ve decided to name her Petunia. *SQUEAL* I think these BJDs are going to be the death of me. They are hell on my wallet and so hard to resist…

There is another Korean company called Elfdoll that also has tiny BJDs that can work really well in 1:12 scale. Their TinyDoll line are approximately 5.5″ tall, 14cm to be exact. There are anamorphic versions of these dolls called Catsy, that has the same body as the human/fairy dolls. The Catsy dolls are easier to look for in Flickr and I found a photo set that provides a good idea of what it looks like with 1:12 scale miniatures.

The best part about these dolls is that they are slim and more proportionate than the PukiPuki or the Lati Whites in 1:12 scale. Do I regret ordering those other dolls? Heck no! I’m still really excited about them and am desperately waiting for them…. and I plan on getting an Elfdoll as well!

The problem right now is that the Elfdoll TinyDolls costs $270 big ones and I am completely broke from paying for the PukiPuki and Lati White. Fortunately, they have a layaway plan, so I’ll check to see how my finances are and look into doing a 4-6 month plan. Its a long wait, but it is a more affordable alternative for me. Some good news about the cost is that the shipping is free, though I’m sure it is factored in the price.

I am still not sure which doll I am going to get and I’m split between the Mindere and Kai models.

Mindere has a huge head and eyes that are more disproportionate than Kai. Her body type is sort of teen-ish, though I she can work as an adult (its not like she’s going to be nekkid in the scenes!). On the plus side, she has normal human ears and the stock clothes that comes with her is more usable out of the box than what comes with Kai. 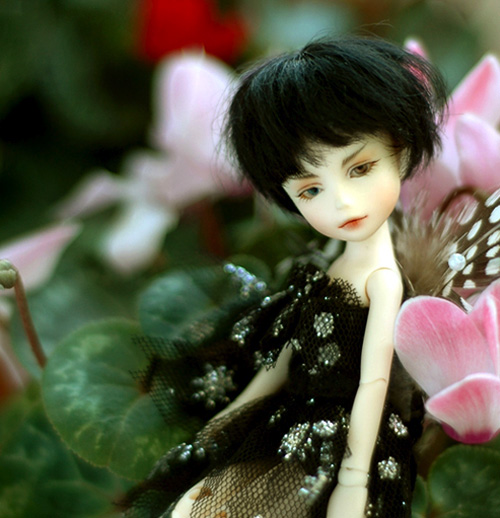 Kai is designed and created as a fairy and has the pointy fairy ears and outfit to prove it. I really don’t want the pointy ears and I probably won’t use the outfit at all. However, she does have smaller eyes that are more proportionate to her face and has a more adult looking face overall. I’m not entirely sure what her body type is like as they don’t have a nude image of her. I hope she doesn’t have the teen body like Mindere, though I can still certainly make it work if it was.

I’m leaning more towards getting Kai (first. Mindere might come later? >_<) and once I get word back from Elfdoll about her body type, it might just seal the deal. Otherwise, I am probably going to take more time to decide.

Found yet another tiny BJD that seems like it can fit 1:12 scale well. The doll is by a company called Dollmore and the particular model is called Banji. They are slim, similarly to the Elfdoll TinyDolls above and are about the same height at 14.5cm or 5.7 inches. Even better is the fact that it costs about $170 USD with shipping not included.. much more affordable for me. Granted that it doesn’t include wigs or an outfit or anything, but I prefer basic doll without any of those stuff so I can make/buy my own. 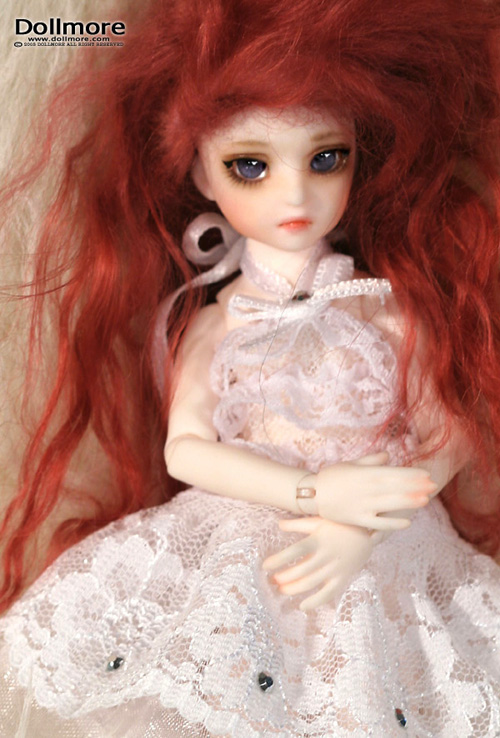 The particular model that I’ve got my eye on is the one named Eomji (aka Wine), but it’s sold out at the time of this writing. Hopefully she will be restocked…. not that I have any sort of money available right now to buy her.

But when I do, I hope she’ll be available for purchase!

I recently placed my first layaway payment on an Elfdoll TinyDoll Kai. I don’t expect to get her anytime soon since it’s a 3-6 month layaway plan that I am doing. I placed this payment right after my LatiWhite came home.

To avoid going bankrupt from BJDs, I’m only going to buy a new doll when the current order comes in. That way, it would be about 2-3 dolls every 2 years at most!

I already know what doll I’ll be ordering after Kai comes home: another FairyLand PukiPuki. This time it is a full package, the Caramel Mushroom (yes, I want another boy!). I really hope he doesn’t get sold out by the time I can buy him!

My first BJD, a PukiPuki PongPong, arrived on January 14, 2011. I named him Dakota. You can read more about him on Dakota’s introductory post. I’ve also posted a bunch of pictures in Dakota’s Flickr Set case you want to check out the unboxing and see what he’s been up to!

My second BJD, a LatiWhite Belle, arrived on June 4th, 2011 (ordered her on Dec 24, 2010!). You can read more about her on Petunia’s introductory post. Her unboxing event and other pictures are posted in Petunia’s Flickr Set.