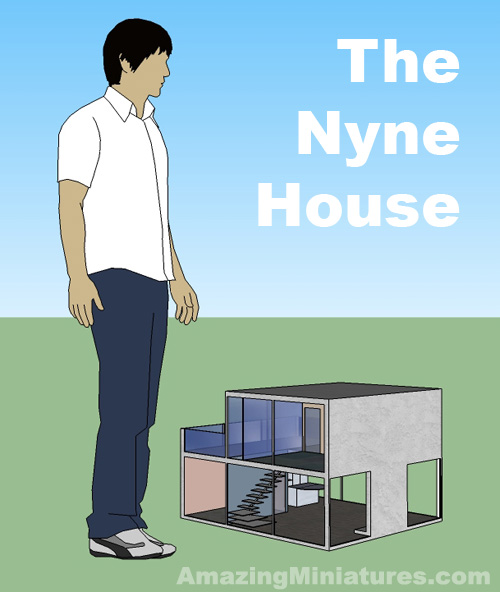 So this is the project that I dreamt up a few months ago and have been planning since. I actually started working on it a few weeks ago in my spare time (which is very limited) and have only got to the framing process. 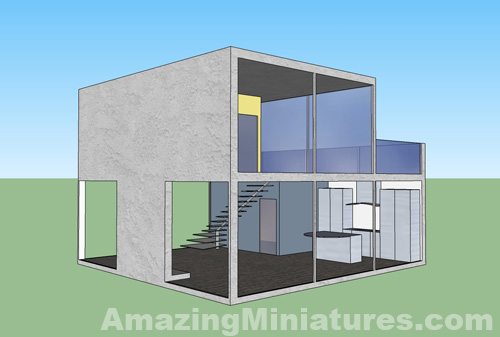 Remember a post I made a long while back? The Nyne House is sort of it’s great, great, great, great, great, great grand child. It wasn’t until a few months of getting better at Google Sketchup and getting more experience building and “playing” with 1:12 scale dollhouses, that I learned about the elements that were most desirable in a modern dollhouse just for me.

It had to be easy to use in setting up the scenes, open enough for my giant camera to fit and take pictures, it had to look great from all (or most) angles, it had to be light weight, and used with a material that is easy to build with (since my access to power tools during the cold months is very limited). With all the must-haves, it also had to be a home that I would actually want to live in! 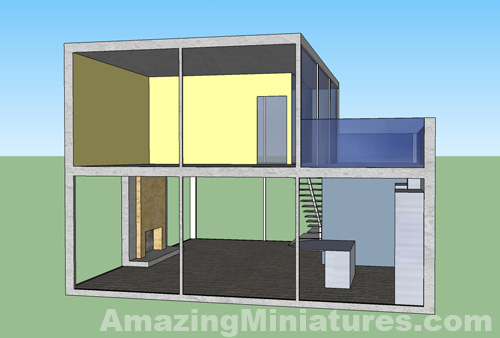 There were many, many, many, MANY different images and plans from many different architectural firms that served as inspiration; Public Architecture and Planning and SPG Architects are to name a few. Seriously, just take a peek at their gallery and you’ll see what I’m talking about.

Now, I don’t fancy myself an architecture or even a hobbyist architecture (is there even such a thing!?), but I do know what I like and admire and I try to emulate it the best I can.

After all the research, the rendered pictures you see here is ultimately the plan that I came up with. It’s a one bed room, 1 bathroom, luxury modern (little) home. The boxiness and the symmetry should make it easier for me to build (hypothetically). 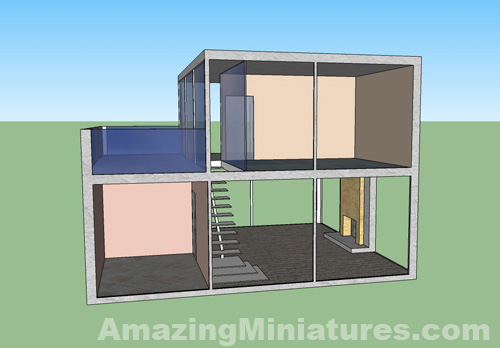 It is named the “Nyne House” as a play on the word “nine.” The number 9 is a significant because the area of the first floor consists of 9 cubes of 9″ by 9″ by 9″ which you can see is carried upstairs. It will be built in 1″ scale. If you think about it in life sized terms, it would not be a very big house with 1,214 sq ft of indoor living space, but since it is built for a 1″ scale Ann, that it’s more than enough room for me, I mean, her. Besides, any bigger would make this an issue in trying to hide it from my family.

The Nyne House has a lot of windows which I love, but it would also act as a way for me to freely maneuver my giant hands (and camera) in and around the house. There will be plexiglas to fully enclose the home when its not in use, because I plan on making the plexiglas removable, by enabling it to slide it in and out from the side. In the images above, the parts without the “glass” shows the areas that the plexi that are be removable from.

Because I want the focus of this project to be on building it, I am not going to get into electrifying dollhouses just yet. I’m saving that for the Willow sometime in the near (or far) future.

You might notice that the load bearing walls are pretty darn thick for a dollhouse, but they were much thinner in a previous version when I had planned on building it out of 1/4″ plywood. Since I would most definitely have to use power tools for cutting plywood, I had changed the plans to build it out of foam-core boards (aka gator board) instead. I did buy a huge piece of foam-core but was discouraged at how freaking expensive it was.

After some initial research on a cheaper, but safe alternative, I decided on using the foam that is used for life sized home insulation as the load bearing walls and floors. To buy the right product, I donned my old UMass sweatshirt and headed to the local HomeDepot to pretend to be a architecture student in need of supplies for a class assignment (so I don’t get those weird looks or smirks when I tell them that its to build a dollhouse). I needed to ask a worker there to make sure I choose the right material that is safe to use for model building, because I know that certain insulation can be very hazardous to use.

In the end, I bought two pieces of three quarter inch Foamular 250 for 1/4th of the cost of getting the same area space and volume as foam-core from the craft shops. 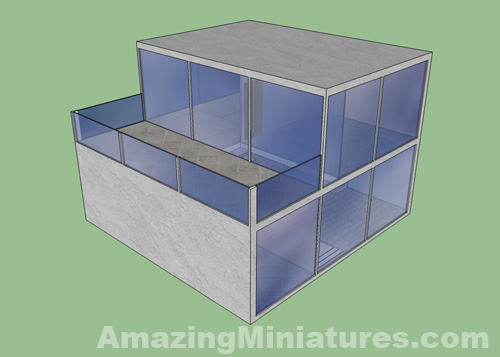 So I’m going to start to build the Nyne House and I have grand plans for it. I’m not sure how long this build will take to finish 100%. I’m hoping to get the basic frame up, the interior walls, and floors installed by the end of Jan 2011. How much I am able to work on this depends largely on my financial situation, but do I want to learn as much as possible from building it using non-conventional tools and materials and documenting it here.

7 Responses to The Nyne House