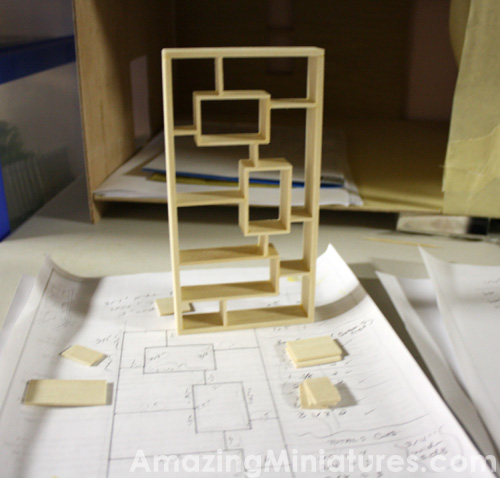 This time, its a project inspired by a Barbie sized Randall Craig bookcase in a photo taken by Michael Williams of MAWPhoto.com. I forgot who actually had a blog post on Michael Williams’ work, but I had book marked his flickr page a while back and have been enthralled by his photos ever since. I noticed that my favorite pictures from his collection typically had that bookcase in it. Its just soooo cool!

So, I wanted to see if I could make something similar. You can tell that its not exactly scale to the original, because I decided to make all the pieces divisible by .5″ to keep things simple. I did however borrow many of the placements of the blocks.

You can see that I made two of them. I wanted two so I can flank them on the sides of a table, sofa, or bed or something. It would make a neat picture, don’t ya think?

Also in the photo above, the scribbles are the dimensions of the pieces and how many I needed to cut for 2 bookcases. There were LOTS of different sizes.

The piece of paper on the right shows another modern bookcase/shelf unit that I designed myself and am in the process of making.

So here’s the Randall Craig inspired bookcase being tested out in a scene with my circle table set.

As for final thoughts, this project was something “simple” I chose to do to test out a new table saw I bought. It ended up being a really complicated with all the different cut sizes and teeny pieces to glue together. There were even certain times where I had to manually hold the pieces together and wait for the glue to dry. As with most of my projects, it took way longer than I initially thought.

I really LOVE how it looks and I can’t wait to finish it. But I’m probably not going to attempt to make this bookcase again for sanity reasons. =)